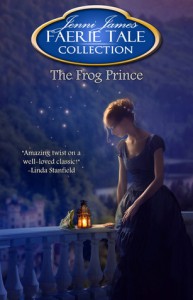 Jenni James has once again proven herself to be extraordinarily gifted with her fairy tale retellings. While staying close to the setting and dreamy quality of fairy tales, Jenni James sends her readers off to a darker, more developed fairy tale world. These retellings all have a special quality about them that set them above all others. For example, Sleeping Beauty included a world of good warriors fighting off the evil witches. I mean who would ever think of that? What about a cannibalistic stepmother in Hansel and Gretel? The stuff Jenni James usually writes is just candy (fluff, but addictingly tasty fluff), so when she started exploring human nature through fairy tales, her retellings reach another level of amazing-ness.

We begin with a not-so stereotypical scene of a prince convincing his mother that turning into a frog is the best course of action. A majority of Jenni James' retellings involve witty banter, and this was no exception. It may seem as if the smart talk takes up a majority of the book because there is so much of it, but it really suits the story. In fact, it is way more amusing to see characters making fun of each other using their words, rather than the more commonly used body gags.

The best part, though, was not the humor inserted in the dialogue: in reality, it was the depiction of the natural bond between Nolan and Blythe that develops. I know, it's ridiculous that a person can bond with a frog. But somehow it's easy to fly with this idea that people can bond with frogs realistically. The original fairy tale was kind of "meh" on explaining how a princess who hates frogs can deal with a frog hovering around her 24/7, so this take on The Frog Prince revises and improves the logistics of how princess and frog fall in love and eventually marry. We really see that from the moment Nolan and Blythe meet that these need each other and how their relationship shifts from acquaintances to close confidants to finally lovers is so romantic. It's difficult for a book to force a reader to fall hard for the romance, especially in an 87 page book, but this book managed to do it so effortlessly.

The thing that really strikes the most is the evolution Nolan and Blyth themselves. Remember him? How he thought that he was better than his fiancé and wanted to judge her? Remember her? The one who judges on first impressions? Yeah, these two flawed people are able to overcome their faults with one another's help, which is so adorable and meaningful. This relationship is definitely a keeper!

Sigh... Fluffy fairy tale retellings are always a relaxing, fun read, but only if they are done right. Too often writers incorporate too much detail or aren't able to sell their retelling. Thankfully, The Frog Prince didn't have too many problems with this. The only thing that was really annoying was the extremely rushed endings that Jenni James always ends with. Once again, the ending was kind of lame and needed more oomph to make it have greater impact. Rushed endings with quick little blah blah stuff is always a drag to read, so I really hope that the next fairy tale won't face this epidemic problem. However, this was expected, especially after this happening seven times already. Despite this minor issue, The Frog Prince is a fantastic retelling that stays true to the essence of the original while exceeding expectations with a beautiful romance that eclipses all others.