The Girl in the Clockwork Collar (The Steampunk Chronicles) 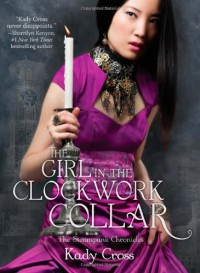 4.5 Stars! Check this review out on our blog!

had previously read the first book in the series, Girl in the Steel Corset, and I absolutely loved it, so I decided to read this. Although I am a total feminist (I pretty much only read books about female heroine), and this plot is centered more around Jasper, I really liked it, no loved it. It was amazing. Oh my gosh, the ending. What a plot twist. There were some hints, and I was sort of expecting it, but I was still blown away. Talk about a freaking out, whew.

I found that I continued to like Finley. She is torn between two very different sides of herself, and is trying to work it out, which is very hard for her. One of my favorite parts about her though is how she is such a bad ass, fearless and an amazing fighter. On the other hand, the only thing that annoyed me about her was how stupid she could be sometimes. It is so obvious how she and Griffin are meant for each other, yet they are both too stupid to say it and tell each other. I just wanted to give them both a good smack on the head. Oh well, I think it will work out, eventually. That is what the third book will be for (hopefully, I mean there better be a third book).

Griffin. Hmmm . . . . I didn't like him so much in this book. I just wish he would have more confidence in himself and how powerful he truly is, he doesn't need to be physically strong to prove it. He's also a great guy who should not hold back so much and let himself be with Finley. For me, it seemed he felt a little too sorry for himself at times, but I can see how he would be insecure. He is such a sweetie, and so brave, I just want him and Finley to be happy together.

Poor Jasper, I just felt so bad for him. He is such a noble character, yet is hurt so much because of it. I hope he finds someone new and can move on. Personally, I am very proud of him, how he holds himself together is really impressive.

Mei, I just wanted to kill you. I can't say anymore and reveal a spoiler, but grrrrrr. My opinion was so changed by the end. Also, Dalton is such a slimy little bastard, he better never come near me or I will kick him right where it hurts.

The cover was also one of my favorite parts. It relates to the book (portrays Mei), and it is just so cool looking. The collar and the dress compliment each other, and really illustrate the Victorian and clockwork/mechanical aspect of this novel. Not to mention there is an asian on the cover (for once). I am excited about where this series is headed, and can't wait for the next book! This is highly recommended, especially if you like steampunk novels, but I would read the Girl in the Steel Corset first. Happy Reading!